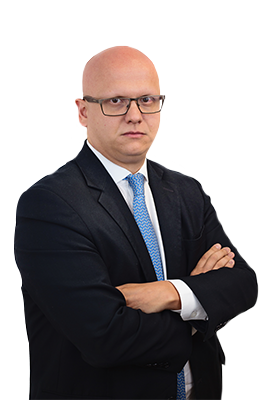 Partner with more than fifteen years of intense experience in dispute resolution. Since 2006, Mr. Pimenta is involved in several of the most emblematic litigation cases in the country, such as commercial and contractual disputes, corporate cross-border claims, hostile takeovers, investment and infrastructure arbitrations, special operations in insolvency environment, and credit recovery.

According to clients, he is well known for gathering competence, tenacity, resilience and extreme dedication.

He is ranked by Latin America Corporate Counsel Association (LACCA) as one of the best litigation and arbitration attorneys of Latin America; he was elected, along with the team he leads, the best counsel of 2019 and 2020 for credit recovery by BTG Pactual and the bank’s distress asset manager, Enforce, which has more than BRL 35 billion in assets under management; he was also awarded, along with his team, the Deal of the Year 2016 for Latin America, sponsored by Latin Lawyer Review, for his work in the dispute for the control of Oi S.A. and, after that, the global award cross-border cooperation in a specific restructuring or insolvency matter, sponsored by Global Restructuring Review.

He graduated from the University of the State of Rio de Janeiro (UERJ, 2006), under the academic supervision of Justice Luiz Fux, of the Brazilian Supreme Court, in his graduation monograph about Stay of sentences and injunctions; was approved 1st place for the Masters Program of UERJ (2008) in Civil Procedure Law, under the academic supervision of Professor Leonardo Greco; was a visiting researcher in the Università Degli Studi di Firenze with Professor Proto Pisani (2009) and specialized in Contract Law in Fundação Getúlio Vargas (2007).

He is fluent in English and Italian and has advanced knowledge of Spanish.